This week, I’ve been working with https://medium.com/@adamhathcock to set up some infrastructure for a project we’re working on.

We’re using API Gateway and using the Custom Domains feature so we can run all our APIs on the same domain, e.g. https://api.example.com/{service}/.

Most of our APIs are Serverless, comprised of Lambdas running in response to API Gateway events, which keeps time spent managing infrastructure to a minimum, but we wanted to slot in a service which runs as a Docker container on an ECS cluster inside a VPC.

Up until recently, the way to do this was to publish your backend service on the Internet and then route that via the API Gateway. That was a bit rubbish, because your service ended up also being addressable directly on the Web instead of only through the API Gateway.

“VPC Link” provides a way for API Gateway to connect to a private (internal) load balancer inside your VPC but the only type of Load Balancer that’s supported is a Network Load Balancer.

Network Load Balancers are very simple, but this simplicity places some restrictions on your design.

This allows an ECS node to choose a port on the machine to open up from a range of available ports (see http://docs.aws.amazon.com/AmazonECS/latest/APIReference/API_PortMapping.html), while routing traffic from that external port to a port open on the Docker container.

ALB supports routing to ECS natively, so when you’re using an ALB, a security group which allows access on that port can be set up against the ALB, without having to worry about the dynamic nature of ports allocated within the ECS cluster.

I mention this because prior to VPC Link being available, this is what I would have done to make a service available on the Web.

As a result, if you want to connect API Gateway to your private ECS cluster, you need to make sure that the service you’re sharing is available on a fixed port in the task definition:

You also then need to make sure that the EC2 instances which make up your ECS cluster have a security group configured to allow access to this port:

Setting up the “VPC Link” itself can’t be done using Terraform as of December 2017 and is tracked as an issue at https://github.com/terraform-providers/terraform-provider-aws/issues/2511 so you’re going to have to configure it manually for now. 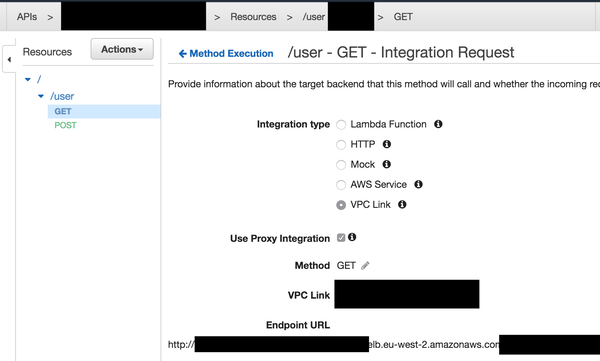